For the 1972 Olympic Summer Games, architect Günter Behnisch and his colleagues turned the 740 acre Oberwiesenfeld site into the Olympiapark. The sweeping canopy roof by Frei Otto is a fitting interpretation of the original theme of “green Olympic Games,” and the organic shell provides a light and airy cover. Since FC Bayern’s move to Allianz Arena, the Olympic Stadium may not be in the limelight as much as it used to be, but it’s still Munich’s best-known landmark. 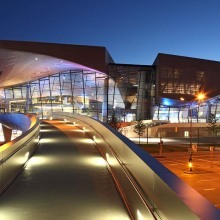