CHOOSE A CITY NEWS VIDEOS ON STAGE
‹ ›
THE BUSHWICK COLLECTIVE: ONE OF THE WORLDS MOST IMPRESSIVE STREET ART AREA

Founded by native Joseph Ficalora, The Bushwick Collective pays tribute to a daring artistic medium and bares testament to positive change. Ficarola’s family, Bushwick to the core—his father owned the steel factory that he now runs—was affected by some of the violence that once ran roughshod over the streets.

In the ’70s and ’80s, Bushwick was notorious for its riots and gang warfare. Ficarola’s own father was killed in 1991 during a mugging. With support from longtime residents and gentrifiers, Ficarola mobilized a forward-thinking movement with art as its foundation. He aligned with other factory owners to carve a living, thriving canvas out of the crude cityscape. The Collective’s epic display of street art changes every few months as commissioned artists from around the world come and go.

Running from Jefferson to Wyckoff Avenue, respected virtuosos such as Gaia, Hellbent, and Pixel Pancho splash, spray paint, and wheat-paste their oeuvre on manufacturing plants and warehouses once dilapidated and covered in graffiti. Political and social commentaries meet surreal images and monumental portraits. The Collective highlights Bushwick’s tenacious sense of community, signaling a bright future for the area and beyond. 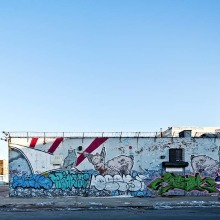