This festival hall was opened in 1909 and known to be the biggest domed building during the late historicism in Europe; it employed the cutting-edge technology at its time. The architect of this festival hall, Friedrich von Thiersch, was an expert for the employed concept of a domed building and for splendid design in the style of the neo-baroque. Until today this 213-ft.-wide and 130-ft.-high cupola—planned as an an arched ceiling made of steel and glass—is seen as a technical masterpiece and has often been imitated. Since 1972 the hall is under monumental protection. 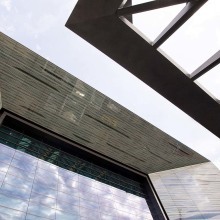