Located in the historic port district of downtown Manhattan, the South Street Seaport Museum preserves the history of the site and tells the intimate story of the port and its symbiotic relationship with New York.

The museum resides in the Schermerhorn Row Block, a stretch of 12 houses built by Peter Schermerhorn, a Dutch merchant who ran a ship supply company in the post-Revolutionary War period.

The four-story houses, built in a utilitarian Federal style, were heavily frequented as commercial spaces during the various heydays of the port. Completed in 1812, the Schermerhorn Row Block has survived until present day in near perfect condition, despite economic highs and lows and numerous natural disasters.

Within the walls of this living artifact, the museum exhibits a collection of paintings by well-known maritime artists, scrimshaw, trade cards, 19th-century figureheads, and other works related to overseas and mercantile pursuits from the 18th to 20th centuries.

Walking tours conducted by museum volunteers take the visitor onto cobblestone streets and under the shade of buildings that have stood firm for the last 200 years. Representative of mercantile architecture, in Federal, Georgian, and Greek Revival styles, the interiors of these stately buildings witnessed major formative commercial and social activity.

If not for the South Street Seaport Museum, and particularly its founder, Peter Stanford, a Brooklyn native and naval veteran of World War II, the area would not be the center of cultural exchange that it is today. Having returned to its former glory, the port is a testament to the evolution of a city and a country.

Established in 1967, the South Street Seaport Museum has brought tourists, retailers, New Yorkers, musicians, and artists to experience a taste of old New York. Even after Hurricane Sandy, when the Schermerhorn Row Block flooded, the museum continued its duties of educational initiatives at Bowne & Co. Stationers, a printing press established in 1775, and aboard two of its ships, the Ambrose and Peking. Around the corner from Bowne, the Maritime Craft Center, run by woodcarver Sal Polisi, gives visitors a taste of old-world building.

Weathering the storm like an armada, the museum’s fleet of seven ships—some of which are over a century old—sits harbored in the port. Visitors can board these multi-purpose vessels and schooners, which have been kept in pristine condition. One of them, the Pioneer, built in 1885, still sails around Lower Manhattan and is open to visitors.

All proceeds from sales, donations, and special events hosted in any of the museum spaces benefit the programs of the South Street Seaport Museum and contribute to keeping this national institution riding high across the waves of time. 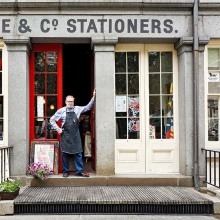