This is the closest any mere mortal is likely to get to the Space Shuttle. After completing its final mission in May 2011, the Endeavour became the main attraction of the aerospace exhibit at the California Science Center. Architecture fans will love the building. In 1984, the metal-sided structure with its sharp angles became Frank Gehry’s first major public project. The other exhibits (Ecosystems, Creative World) and the IMAX theater bring science to life for young and old. 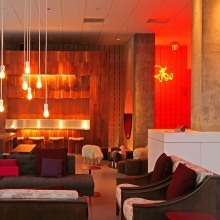